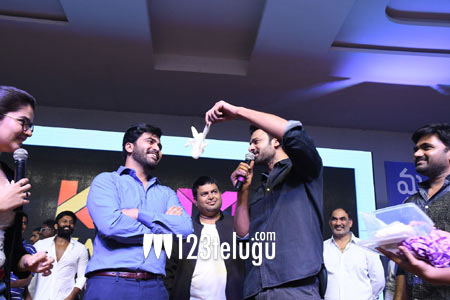 Young Rebel Star Prabhas was the chief guest at the pre-release event of Sharwanand’s soon to be released rom-com, Mahanubhavudu, tonight. Before his speech, Prabhas showed his wacky side to his fans by gifting Sharwa a Dettol bottle, sanitizer, pollution mask and gloves etc as Sharwa plays a man with an OCD for cleanliness. Prabhas’ quirky gift had got his fans and Mahanubhavudu’s team in splits.

Prabhas then heaped praises on Sharwa’s humble attitude and hailed him as the future superstar. The Baahubali actor further praised Mahanubhavudu’s director Maruthi and said that he thoroughly enjoyed the director’s Prema Katha Chitram.

Mahanubhavudu stars Mehreen Pirzada as the female lead. Thaman is the film’s music composer and UV Creations banner has bankrolled the movie. Mahanubhavudu is slated for release on September 29.