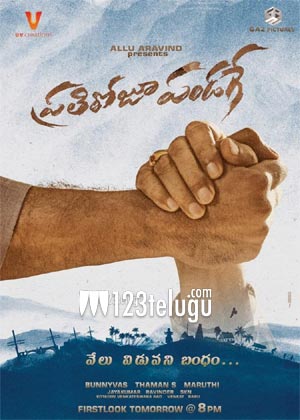 Sai Dharam Tej and Maruthi’s family entertainer, Prathiroju Pandage, is nearly halfway through with its shooting formalities. The film is slated to release during the Christmas weekend. Expectations are quite high on this movie.

As per the latest updates, Pratiroju Pandage’s first look poster will be out tomorrow at 8 pm. The makers unveiled an interesting pre-look poster to announce the same. The pre-look showcases a young man’s hand holding an old man’s hand, hinting that the film is going to be high on emotions.

Pratiroju Pandage is said to be based on a father-son relationship. Veteran hero Sathyaraj plays a key role in the movie. Raashi Khanna is the film’s leading lady. This is the second time that Sai and Raashi are sharing screen space after Supreme. The film is being produced under GA2 and UV Creations banners. Thaman is scoring the soundtrack.