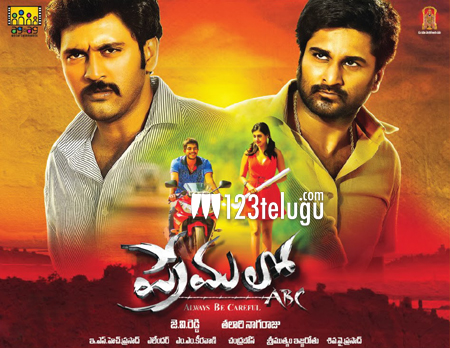 True movie lovers doesn’t know the difference between a small and big movie. He values the talent and quality of the making. New concept movie are adored by all sects of audience. Even it may rain at Box office.

With the same feeling another small film is coming before the audience as ‘Premalo ABC’ on 25th July. Title seems to be a peculiar isn’t it ? Movie is also said to have more surprises, says debutant director Talari Nagaraju. Ajay who got recognition with supporting roles is the Hero of this film. Along with him, Rushi is another lead. Rushi has acted previously in a technically rich film “A film by Aravind’. Sri Ira, Rubi Parihaar are heroines. JV Reddy has produced this film and is releasing on July 25th.

It is quite natural to get a doubt “ABC in title ?”. ABC means Always Be Careful. If you fall in love each and every second is thought to be as heaven. There is the fault. You need to be careful while in love. This concept drives this movie. Love and thrill are mixed to bring this movie to us. Film unit is describing this movie as thrilling and each and every scene contains speciality. Without missing on entertainment, Dhanraj,Suman Setty & Srinivas Reddy’s comedy will stay as highlight. That’s not all, our favourite actor AVS is also seen in this movie. Elender has composed music and this movie. Embedding top director MM Keeravani’s song is a special news.