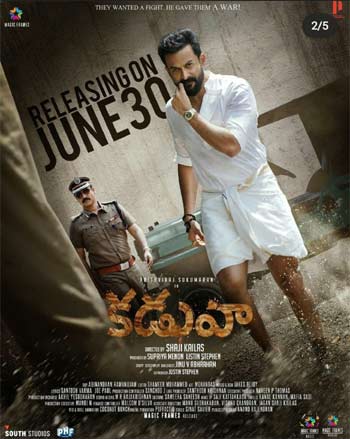 Malayalam Star, Prithviraj Sukumaran and director Shaji Kailas have teamed up for a film called Kaduva.

The makers came up with release date of the movie and it will be out worldwide in theatres on June 30th in Malayalam, Telugu, Tamil, Kannada and Hindi

The flick is high on action and has also Vivek Oberoi in a key role. ‘Bheemla Nayak’ fame Samyukta menon is female lead.

Produced by Listin Stephen and Supriya Menon under the banners Magic Frames & Prithviraj Productions, the film has music by Jakes Bejoy.