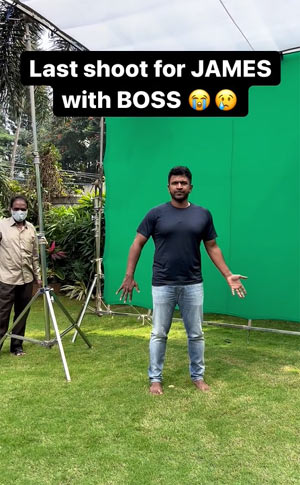 Millions of heartbroken fans and well-wishers from the film and political worlds bid a tearful adieu to Sandalwood Power Star Puneeth Rajkumar this morning. Puneeth was laid to rest with full state honors at Sree Kanteerava Studios in Bengaluru.

Meanwhile, noted photographer Chandan Gowda took to Instagram and shared a video of Puneeth’s last photoshoot for his upcoming film, James. Puneeth looked quite energetic and in his element as usual in this viral video. The photoshoot was done just 3 days before Puneeth breathed his last, leaving his fans and family members shell-shocked.

While Puneeth’s James is under production, Dvitha was announced a couple of months ago. The fate of both these movies is unknown as of now.