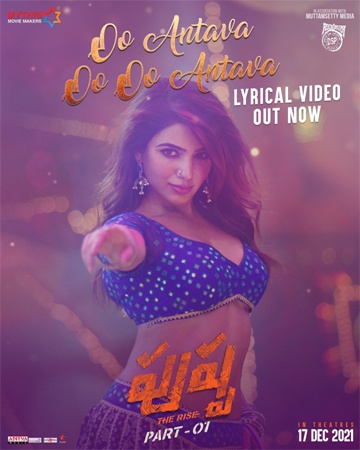 Oo Antava Maava, the highly-anticipated special song from Allu Arjun and Sukumar’s Pushpa, is out finally. The song has created a lot of hype and anticipation since its Samantha’s first-ever special number in her career.

Oo Antava Maava is not a usual mass dance number, as it takes its listeners on a trippy, psychedelic ride on first hearing itself. Young playback singer Indravathi Chouhan’s energetic rendition adds spice to the song, while composer Devi Sri Prasad’s terrific composition and Chandrabose’s raunchy yet thought-provoking lyrics make the song a perfect party number this season. Glimpses of grand sets and Samantha’s slender and sizzling appearance can be seen in the lyrical video.