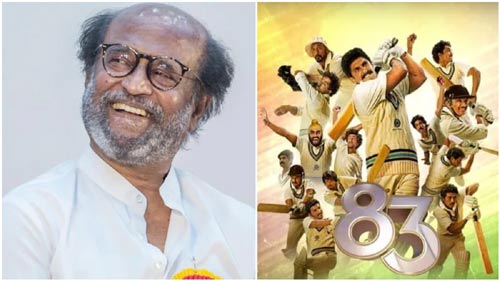 Super Star, Rajinikanth has watched and lauded the movie, 83, a biographical sports drama, featuring Ranveer Singh in a leading role.

The star hero took to Twitter and wrote, ‘Wow, what a movie… magnificent!’ about the movie.

He appreciated the actor Ranveer Singh, who played the legendary cricket player Kapil Dev in the movie, Jiiva, director Kabir Khan and the remaining cast and crew behind the biopic. He also congratulated the producers for making this great film.

#83TheMovie wow 👏🏻👏🏻 what a movie… magnificent!!! Many congratulations to the producers @kabirkhankk @therealkapildev @RanveerOfficial @JiivaOfficial and all the cast and crew …