Kollywood stalwart Super Star Rajinikanth has been chosen for the prestigious Dadasaheb Phalke Award, India’s highest honour for excellence in the field of cinema. On receiving this special honour, Rajini penned a heartfelt note and thanked several people.

Rajini extended heartfelt gratitude to the Indian government, PM Narendra Modi and the jury for conferring him with the nation’s most prestigious Dadasaheb Phalke Award. Rajini also thanked his friend Raj Bahadur, his bus driver who discovered his acting talent and encouraged him, his brother Satyanarayana Rao Gaikwad, his guru and legendary director K Balachander who launched him as Rajinikanth in the film industry.

Rajini dedicated this award to his directors, producers, technicians, distributors, exhibitors, the press and digital media and to the godly Tamil people who made him live and to his fan base around the world, Tamil Nadu CM E Palaniswami, Deputy CM Paneerselvam, opposition leader MK Stalin and his good friend and legendary actor-filmmaker Kamal Haasan, politicians from Tamil Nadu and across the country and his friends and well-wishers in the film industry. 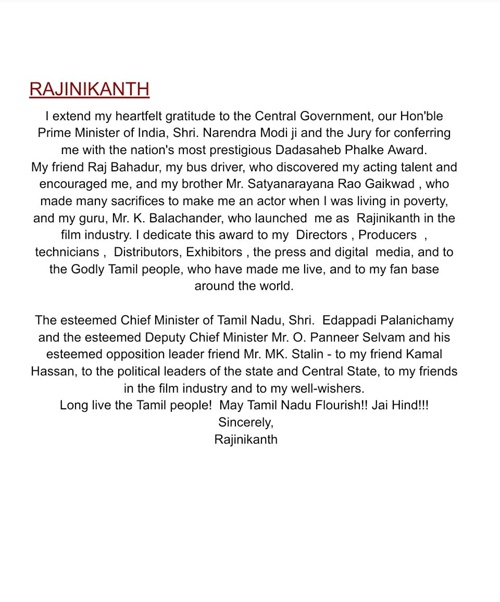