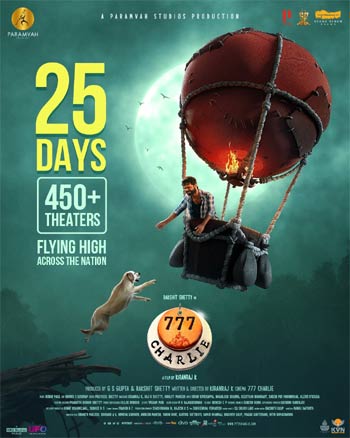 Kannada hero Rakshit Shetty has recently come up with the film 777 Charlie. The movie opened to positive word of mouth and critics’ reviews. Helmed by Kiranraj the movie performed very well at the box office and completed 25 successful days.

The makers are very satisfied with the kind of response the movie received and announced that 5% of the film’s revenue will be given to NGOs in the name of Charlie, that exclusively work for the welfare of Indie dogs and animals. This kind gesture from Rakshit Shetty is winning hearts on social media.

The movie is produced together by Paramvah Studios and Rakshit Shetty and it has music by Nobin Paul. Sangeetha Sringeri. Bobby Simha, Danish Sait, and Raj B. Shetty played other key roles.