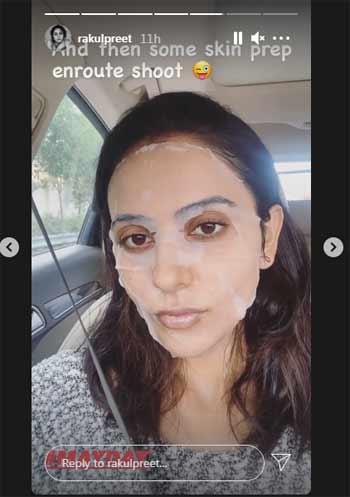 It’s well known that actress Rakul Preet has teamed up with her De De Pyaar De co-star Ajay Devgn for a high budget thriller, titled May Day. Interestingly, Ajay himself is directing the movie apart from playing a crucial role in it. The film’s shooting is currently underway at Ramoji Film City in Hyderabad.

Rakul has joined May Day’s team earlier today. She took to Instagram and shared a fun video in which she has applied a facepack as she left for the shoot. Bollywood legend Amitabh Bachchan, Malli Raava girl Aakanksha Singh and Angira Dhar are the other lead actors in the movie. The film is scheduled for its release on April 29, 2022.