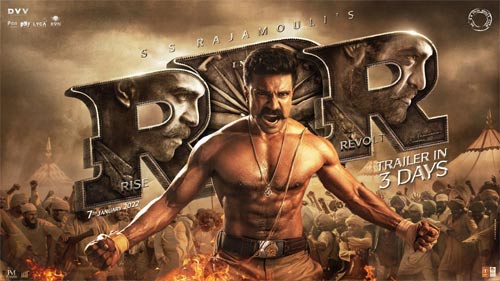 The promotions of India’s biggest action drama, RRR (Rise, Roar, Revolt), are in full swing. Directed by SS Rajamouli, the makers of this magnum opus have released a couple of special character posters of the lead actors, Jr NTR and Ram Charan.

In the morning, they released a special poster of Jr NTR as Bheem and they did the same in the case of Ram Charan, playing the role of Alluri Seetharama Raju.

In this poster, Charan is showcased as an aggressive police officer who is ready to throw punches at enemies. The trailer of this multi-lingual action entertainer will be grandly released on 9th December 2021.

RRR is all set to hit the big screens on 7th January 2022 in Telugu, Hindi, Tamil, Malayalam, and Kannada.