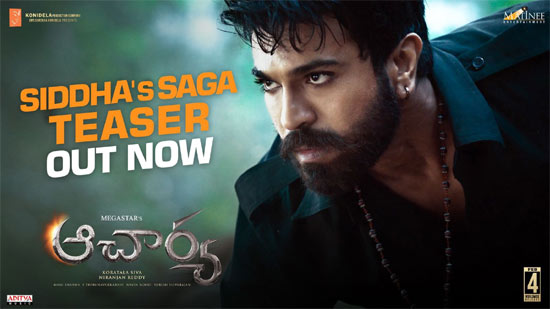 The much-awaited teaser, revealing hero Ram Charan’s Siddha character from his father Megastar Chiranjeevi and Koratala Siva’s Acharya, has been released this evening. The teaser showcases Ram Charan in two strikingly different avatars – a soft and classy village youth and a rough and intense Naxalite.

Siddha’s teaser also showcases a few glimpses of Ram Charan and his lady love Pooja Hegde’s beautiful chemistry. Pooja looks beautiful as a village belle in half sarees. The dramatic events that transform Siddha into a Naxalite will be quite interesting to watch.

Acharya also features Kajal Aggarwal and Sonu Sood in lead roles. The film is being produced by Ram Charan and Niranjan Reddy. Manisharma has composed the music for the film, which is releasing on February 4, 2022.