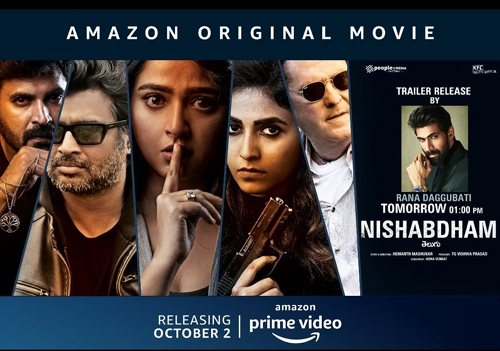 Hero Rana Daggubati will be releasing the trailer for his Baahubali co-star Anushka’s eagerly awaited psychological thriller, Nishabdham. The trailer will be out at 1 pm tomorrow. The film is slated to release on Amazon Prime on October 2.

Nishabdham was entirely shot in the US. Anushka will be seen in the role of a speech and hearing impaired artist. Madhavan, Anjali, Subbaraju, Shalini Pandey and Hollywood star Michael Madsen will be seen essaying crucial roles in this Hemant Madhukar directorial. Kona Venkat and TG Viswaprasad have jointly produced the movie.