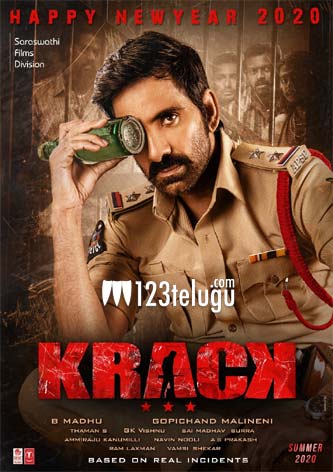 The makers of Ravi Teja and Shruti Haasan’s ongoing action entertainer, Krack, unveiled the film’s first look this morning as a New Year treat. The poster has the Mass Maharaj looking all massy and intense in a cop avatar.

For Krack, Ravi Teja joined forces with his Don Seenu and Balupu director Gopichand Malineni for the third time. Tamil actors Samuthirakhani and Varalaxmi Sarathkumar are playing important roles in the movie. Tagore Madhu is bankrolling the film and Thaman is composing the music.