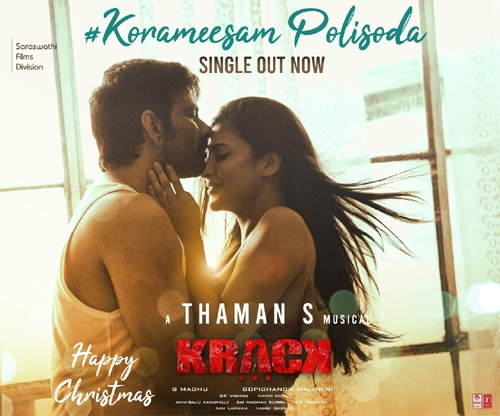 After Bhoom Baddhal and Balega Thagilavey Bangaram, the third song from Ravi Teja and Shruti Haasan’s upcoming action entertainer, Krack, is out. Titled Korameesam Polisoda, the song is full of breezy romance and the lead actor display beautiful chemistry.

Korameesam Polisoda has been sung by young singer Ramya Behera and penned by Ramajogayya Sastry. Star composer Thaman once again comes up with an engaging number. Gopichand Malineni is directing Krack. The film is slated for release on January 14 as a Sankranthi festive treat.

Ravi Teja will be seen as a powerful cop in Krack. Kollywood actress Varalaxmi Sarathkumar plays an important role in the movie. Tagore Madhu is the producer.