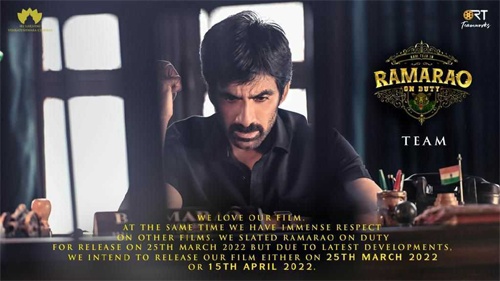 Mass Maharaja, Ravi Teja is doing back to back movies and Ramarao On Duty is one of them. Directed by the debutant Sarath Mandava, the movie has made the headlines today.

The makers have announced that the movie, which was originally scheduled to release on March 25, 2022, has teased another possible release date.

As many Tollywood biggies announced their latest release date, team Ramarao On Duty wanted to make a way for them. So, the makers have announced that the movie might be postponed to April 15, 2022.

Divyansha Kaushik and Rajisha Vijayan are playing the female leads in this high voltage drama. Venu Thottempudi will be seen in a crucial role in this movie.

Bankrolled by SLV Cinemas LLP and RT Teamworks. Sam CS is the music director of this film, which is in the last leg of the shooting.