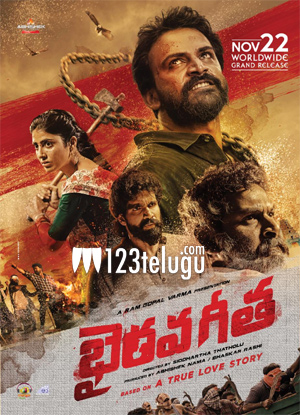 The trailer of RGV’s Bhairava Geetha released to some decent response with its hard-hitting visuals. The latest we hear is that the makers have decided to release the film on the 22nd of November.

Initially, the film was supposed to release on the 12th of October but as the Dussera season was packed with big releases, the makers felt that 22nd of Nov would be the right time.

Bhairava Geetha is a violent love story set in the backdrop of Rayalaseema and is directed by RGV’s assistant Siddharth Thatholu. Irra Mor and Dhananjaya are making their debut.