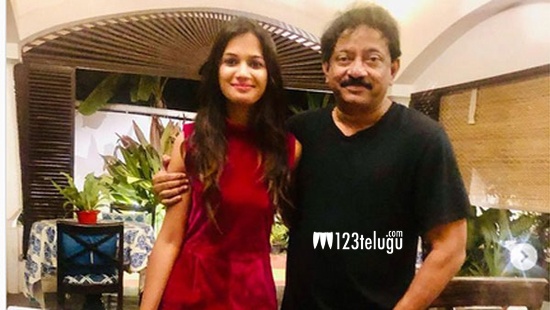 After gaining prominence following her participation in the popular reality game show Bigg Boss Telugu 4, YouTube hostess Ariyana Glory is making a splash on the small and big screens slowly and steadily. Meanwhile, it looks like Ariyana is going to come up with an exciting interview with RGV, the man who brought her into limelight.

RGV took to Twitter just a while ago and revealed that Ariyana came to interview him in the gym and that they both ended up doing some workouts after wrapping up the interview. RGV fondly addressed Ariyana as the ‘Bigg Boss’ Little Girl’. The maverick director also posted a picture in which he and Ariyana were seen in sportswear and lifting dumbbells.

The BIG BOSS ‘S LITTLE GIRL @ariyanaglory came to interview me in GYM ..AFTER INTERVIEW we did WORKOUT 😎😎 COMING SOON https://t.co/OoW7K1ZHHt pic.twitter.com/HDCg99Aij7