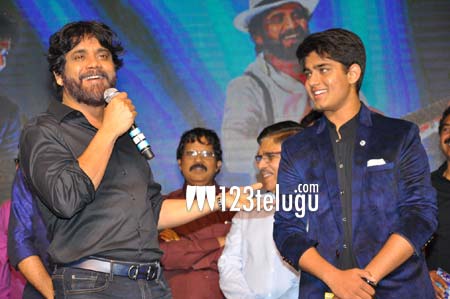 The audio album of senior hero Srikanth’s son Roshan’s debut film as a hero, Nirmala Convent, was unveiled in style last night. Speaking on this occasion, Nagarjuna, who is playing a crucial role in the film apart from co-producing it, had some good things to say about the young hero.

Nag was pleasantly surprised to see a handsome, grown-up Roshan, who was just a naive teenager when he signed the film. Nag appreciated Roshan’s dialogue delivery and memory power and said that Roshan has a long way to go. Needless to say, the young hero was on cloud nine upon being appreciated by Nag.

Nag also lauded the entire team for bringing out a beautiful romantic drama. Nirmala Convent stars Shreya Sharma as the female lead. The movie has been directed by Naga Koteswara Rao. The movie is slated to hit the screens on September 16.