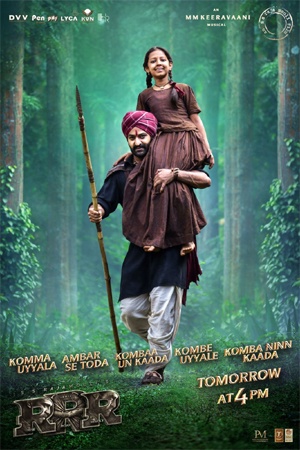 Jr NTR and Ram Charan starrer RRR is still doing well at ticket windows in many areas. The SS Rajamouli directorial smashed many existing records and raked in good money.

A few days after the release of the video song of Naatu Naatu, the makers have announced the release date of the most loved bit song – Komma Uyyala – from the movie. The video song of the soothing track will be out tomorrow at 4 PM in all languages the film released. Netizens are eagerly waiting for the track.

Produced by DVV Danayya on a grand scale, the movie has Alia Bhatt, Olivia Morris, Ajay Devgn, Shriya Saran, and others in pivotal roles. MM Keeravaani provided the music while Senthil cranked the camera.