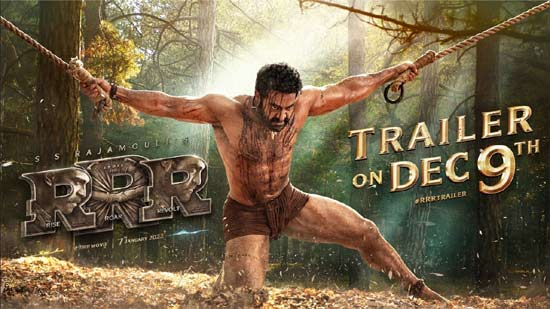 The first-ever trailer of the most awaited Tollywood movie, RRR, will be released tomorrow in a grand manner.

To make the audiences more excited, the makers have released fresh promos of the lead actors – Ram Charan and Jr. NTR. Today, the team has also released a new promo featuring Tarak as Bheem.

Both the promos, which showcased the actors in action, have already been gaining a huge response.

Besides online, the team is also planning to premiere the trailer in selected theaters in twin Telugu states.

Directed by SS Rajamouli, the magnum opus has music by MM Keeravaani. Produced by DVV Danayya, the pan-India film is all set to hit the screens worldwide on January 9, 2022.