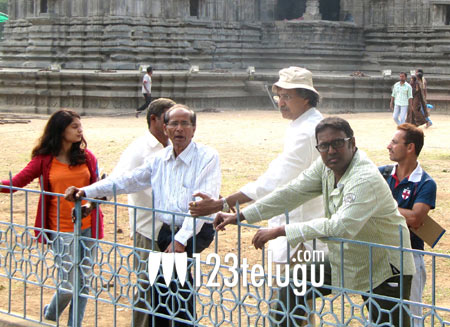 The pre-production of Gunasekhar’s upcoming magnum opus Rudrama Devi is going on full swing. Anushka is going to play the lead role in this historical 3D film which is based on the life of Rani Rudrama Devi, who was one of the most prominent rulers of Kakatiya Kingdom. Recently, Gunasekhar went to Germany for the test shoot and now he is in Warangal to research more about the architecture of Kakatiyas.

“We did a test shoot for a week in Germany and I am extremely happy with the result. Now, we are visiting several historical monuments like 1000 pillared temple, Warangal fort, Ramappa temple and other places in Warangal to research about the architecture of Kakatiyas. Thota Tharani is going to design the sets of the film based on these monuments,” Gunasekhar said. Ilayaraja is going to score the music and Ajay Vincent is the cinematographer. Kamal Kannan is the VFX supervisor. The film will go on floors in 2013.