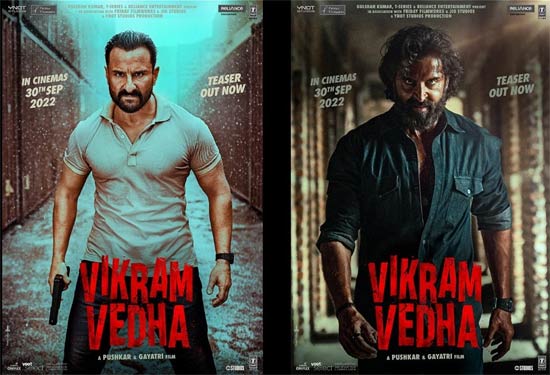 Bollywood handsome hunk Hrithik Roshan’s Vikram Vedha is scheduled for a grand release on 30th September. Hrithik is acting alongside Saif Ali Khan in this action drama which is the remake of the Tamil superhit film with the same name. Hrithik plays the baddie while Saif plays the cop.

The news is that the film’s runtime is locked for 2 hours and 40 minutes. The surprising factor here is that the original version was 2 hours 19 minutes long and it seems that the makers have made a few changes.

The initial advance bookings have opened in a few cities and the full-fledged bookings will start soon. Pushkar-Gayathri, the director duo who helmed the original is directing this Hindi version too. The film is produced by YNOT Studios, Plan C Studios, T-Series Films, and Reliance Entertainment. Radhika Apte, Rohit Saraf, Yogita Bihani, and Sharib Hashmi are doing significant roles.