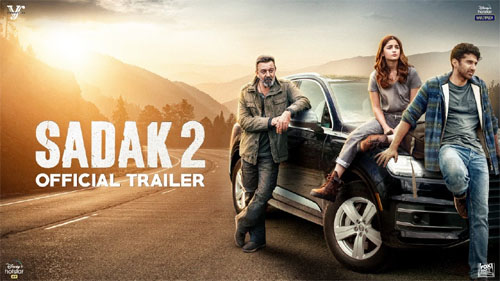 Bollywood star, Sanjay Dutt has been diagnosed with Stage 3 Lung Cancer after he was admitted to Lilavati Hospital in Mumbai last week. News of Sanjay’s health made headlines yesterday. The 61-year-old actor will be flying to the USA for immediate medical treatment.

Meanwhile, the trailer launch for Sadak 2, Sanjay’s soon-to-release Hindi film was postponed indefinitely. The trailer was scheduled to be released yesterday is out now.

Sanjay Dutta plays a key role in this film which is about Good Vs Evil. Alia Bhatt is shown as the girl who hires Sanjay Dutt who plays a cab driver. The visuals are thrilling and comeback director Mahesh Bhatt has put good engaging scenes.

On the other hand, the film will have its world digital premiere on Disney Plus Hotstar on August 28. Sadak 2 also features Pooja Bhatt and Aditya Roy Kapur in lead roles.