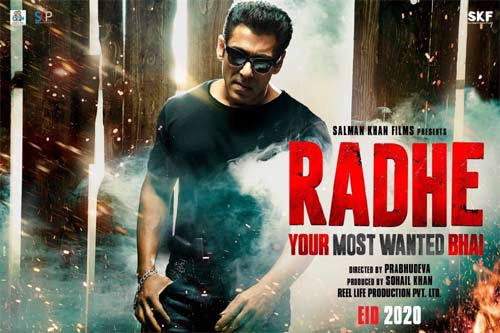 Bollywood star Salman Khan’s upcoming action entertainer, Radhe -Your Most Wanted Bhai, is one of the most eagerly awaited movies which will be hitting screens next year. Now, according to the latest buzz in Bollywood circles, Salman, who’s also producing the movie, has inked a staggering deal to sell off Radhe’s release and streaming rights.

Apparently, Salman has sold Radhe’s satellite, theatrical (Indian and overseas), digital and music streaming rights of to Zee Studios for a jaw-dropping Rs. 230 crores. This is touted as the biggest deal for any Indian film in the COVID-19 times. Radhe is slated for release during the Eid festive season next year.

Prabhudeva is directing Radhe and Disha Patani is the leading lady in the movie. Randeep Hooda and Tamil stars Megha Akash and ‘Premisthe’ Bharath will be seen in crucial roles in the movie.