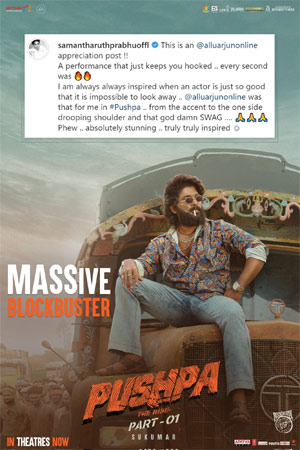 Star actress Samantha Ruth Prabhu, who did a special dance number in Pushpa: The Rise, has praised the film’s lead actor Allu Arjun.

In an Instagram post, Samantha, wrote, “I am always inspired when an actor is just so good that it is impossible to look away. Allu Arjun was that for me in Pushpa.”

The actress also commented that she is stunned by his outstanding performance, accent and his swag throughout the movie.