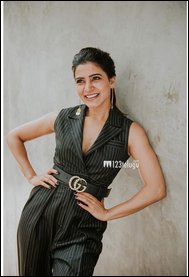 Actress Samantha is eagerly awaiting the release of Oh! Baby, the much-talked-about Telugu remake of the acclaimed Korean drama Miss Granny. The film is scheduled to hit screens on July 5. Now, if the ongoing buzz in Kollywood circles is anything to go by, Sam may soon sign a horror film.

Apparently, Sam has been in talks with Tamil director Doss Ramasamy for a female-centric horror thriller. This film will be primarily made in Tamil and later dubbed in Telugu. Doss Ramasamy had earlier directed Nayanthara’s 2017 acclaimed horror thriller, Dora. We will have to wait until an official is out regarding Sam’s next. Stay tuned for further details.