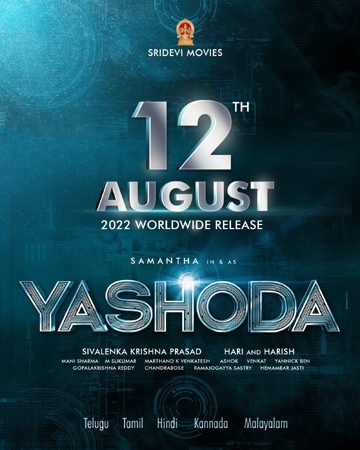 Tollywood star actress Samantha Ruth Prabhu has signed a multilingual project, Yashoda. Directed by Hari and Harish, the movie has made the headlines again.

The makers of the movie have officially announced that the female-centric movie will be released on August 12, 2022, worldwide. The team Yashoda has released a poster to announce the same.

To note, Akhil Akkineni’s action movie, Agent, directed by the maverick filmmaker Surender Reddy also scheduled to hit the screens on the same date. So, both films will clash at the box office on August 12.

Varalaxmi Sarathkumar, Rao Ramesh, Unni Mukundan and Murali Sharma are playing major roles in Yashoda. ‘Melody Brahma’ Manisharma is roped in to score music for this movie which is being produced by Sivalenka Krishna Prasad under the Sridevi Movies banner.