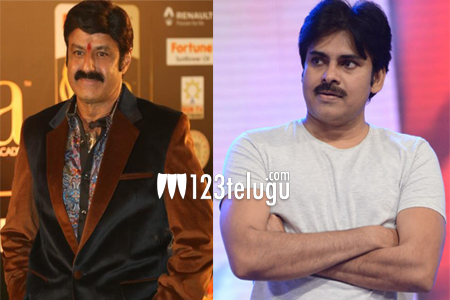 Nandamuri Balakrishna and Pawan Kalyan belong to very different movie compounds with very different fan bases. But there is one common issue that both these heroes are currently facing? Well, let us explain.

Both these films are going to be watched keenly, as Balakrishna is attempting a story that has never been attempted before in Telugu cinema. On the other hand, Pawan Kalyan’s last project ended up as a big loss for the industry and this movie with S.J. Surya is being started immediately to compensate many of the distributors. So naturally, this film will also be keenly observed.

But the issue is the heroine. So far, neither project has a confirmed heroine in hand, though shooting is expected to begin in a matter of weeks. A frantic search is on for the heroines of both Pawan Kalyan and Balakrishna and the makers are willing to cast newcomers as well, in case no appropriate match is found among seasoned actresses.

While Balakrishna’s film is going to hit the screens in Sankranthi, Pawan Kalyan’s movie is said to be in the race for a possible Dussehra release, if everything goes according to plan.