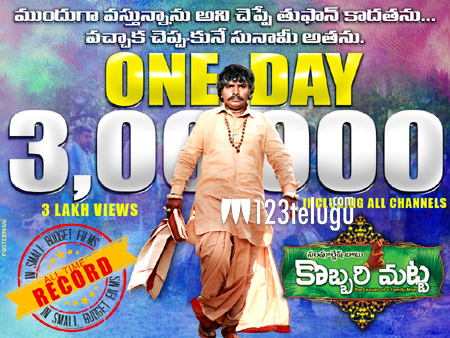 Burning Star Sampoornesh Babu is at it again. After cleverly using social media for the promotion of his first film ‘Hrudaya Kaleyam’, this comedy star is now using the same medium once again for his latest release ‘Kobbari Matta’.

With a teaser that has a mixture of parody, self deprecation and hilariously funny technician names , this burning star got Sai Dharam Tej to launch it yesterday. The teaser has now clocked more than 3 lakh views in all the channels and Sampoornesh is thrilled with this response.

The team says that the movie has been directed by Roopak Ronaldson. Good Cinema group is producing the movie and Kamran is the music director. Can Sampoornesh recreate the magic of ‘Hrudaya Kaleyam’ once again? We will have to wait and see.