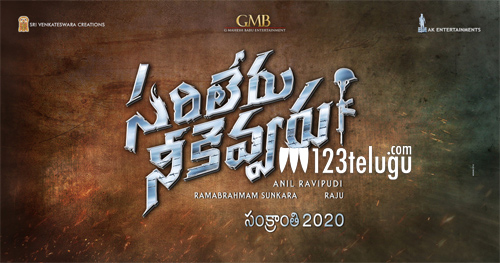 After a 25-day long crucial schedule in Kashmir, the unit of Superstar Mahesh Babu’s much-awaited 26th film, Sarileru Neekevvaru, is currently shooting in Hyderabad. A huge train set has been erected, where several important scenes are being canned on Mahesh, Rashmika and the film’s core cast.

Sarileru Neekevvaru’s Hyderabad schedule kick-started in the last week of July. The latest update reveals that the ongoing schedule will be wrapped up on August 10. Mahesh will be seen in the role of an Army Major in the movie. The fact that the film marks the first ever collaboration between comedy entertainers specialist Anil Ravipudi and Mahesh has raised the expectations among fans and trade circles.

Sarileru Neekevvaru is being produced by Anil Sunkara, Dil Raju and Mahesh Babu. The film is slated to hit screens for Sankranthi early next year.