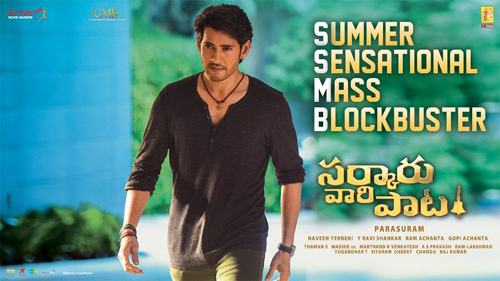 Superstar Mahesh Babu and Keerthy Suresh starrer Sarkaru Vaari Paata is out in theaters and is doing well at the box office. Directed by Parasuram Petla, the movie has Keerthy Suresh as the lead actress.

The movie, which opened in theaters worldwide yesterday, has proved that Mahesh Babu is the real crowd puller. The action entertainer has raked in mammoth collections in Telugu states. Check out the day 1 shares in different areas in Andhra and Telangana.

The movie has turned out to be a blockbuster and collected more than Rs. 36.63 crores share on day 1 in AP and TS. This is the highest day 1 collection for any movie (excluding RRR) that hit screens after the pandemic.

Nadiya, Samuthirakani, Naga Babu, Brahmaji, Vennela Kishore, Subbaraju and others played key roles in this movie. Thaman has rendered the soundtracks for this movie, produced by Mythri Movie Makers, 14 Reels Plus and GMB Entertainment.