Sharwa is another Ram Charan to me: Chiranjeevi at Sreekaram event
Published on Mar 9, 2021 6:59 am IST 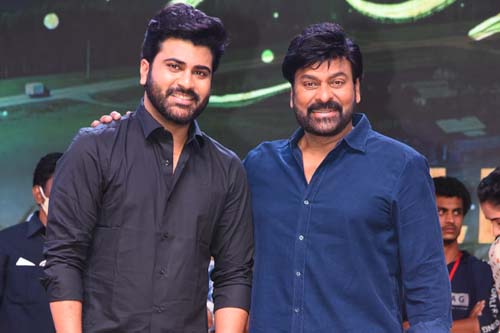 Megastar Chiranjeevi was the chief guest at the grand pre-release event of Sharwanand and Priyanka Arul Mohan’s upcoming drama, Sreekaram. The event was held in Khammam this evening. During his speech, Chiru showered immense love for the young hero and said that Sharwa is like another Ram Charan to him.

“Sharwa has been a good friend of Charan and he grew up in our home. In fact, I introduced him as an actor first with my Thums Up ad 12 years ago and later with Shankar Dada MBBS. He went on to become a talented actor and reached this stage” said a proud Chiru. The Megastar went on to say that he watched 9 minutes of Sreekaram and said that the film will surely be a super hit.

Sreekaram, directed by debutant Kishor, has been produced by Ram and Gopi Achanta under 14 Reels Plus banner. This Mickey J Meyer musical is gearing up for release on March 11.