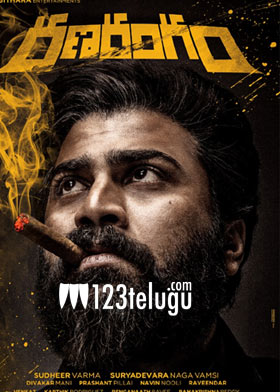 As expected, the first look poster of Sharwanand’s new film is out. We had already reported that this film has been titled Ranarangam and the first look showcases that in its own with Sharwa’s fierce look.

He will be seen in two different looks in the film which is being directed by Sudheer Varma. The film has Kajal and Kalyani Priyadarshan in lead roles. Sithara Entertainments produce this film which also has Aadarsh balakrishna in a key role.

The poster has been designed superbly and reveals the fact that the film will be a gritty gangster drama. For now, the first look makes a good impact.