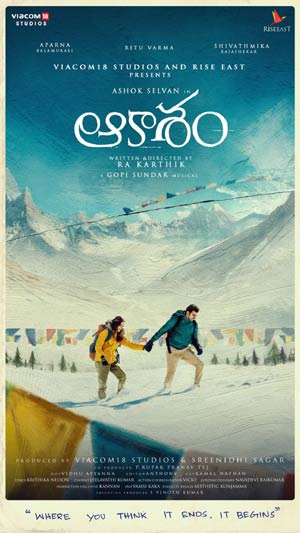 Young actor and producer, Shivathmika Rajashekar’s new movie has been officially announced today. Star hero, Dulquer Salmaan, has unveiled the title and the first look poster of the Tamil-Telugu movie on social media.

Written and directed by debutant, RA Karthik, the movie is titled Nitham Oru Vaanam in Tamil and Aakasham in Telugu. The movie also has Ritu Varma and Aparna Balamurali as the female leads. To note, this is the second movie of Shivathmika Rajashekar in Tamil.

Having Ashok Selvan as the hero, the movie has the music of Gopi Sundar. The movie, which will go on floors soon, is being bankrolled by Viacom18 Studios and Sreenidhi Sagar.