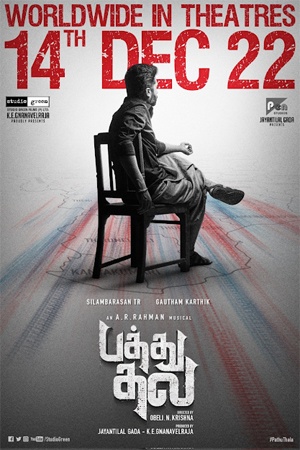 Kollywood star hero Simbu will be seen next in Vendhu Thanindhathu Kaadu, directed by the successful director Gautham Vasudev Menon. The film will hit screens on September 15, 2022. Now, another movie of the star actor gets its release date.

Titled Pathu Thala, the Tamil film is directed by Obeli N Krishna. The makers of the movie have officially announced that the movie will be out in theaters on December 14, 2022. An official poster has also been released to announce the same.

The action drama also has Gautham Karthik, Gautham Menon, Kalaiyarasan and Priya Bhavani, Shankar and Teejay Arunasalam in crucial roles. Bankrolled by Jayantilal Gada and KE Gnanavelraja under the banners of Studio Green and Pen Studios, the film has AR Rahman’s music.