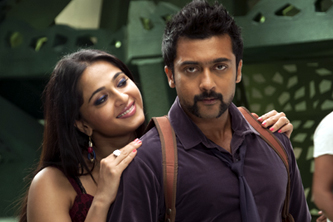 The audio of Suriya’s upcoming film Singam is going to be launched on June 23 in Hyderabad. Hari has directed the film and this mass entertainer stars Suriya, Anushka and Hansika in lead roles. The film is said to be a sequel to Yamudu, which released in 2010 and the Telugu version is being produced by Lakshman Kumar under Prince Pictures banner. Anjali has danced for a special song in this mass entertainer. Suriya stars as a powerful cop in the film and this time, he’ll be fighting with four villains. Most part of the film has been shot in South Tamil Nadu and South Africa. Devi Sri Prasad has scored the music and the film is likely to hit the screens on July 5.