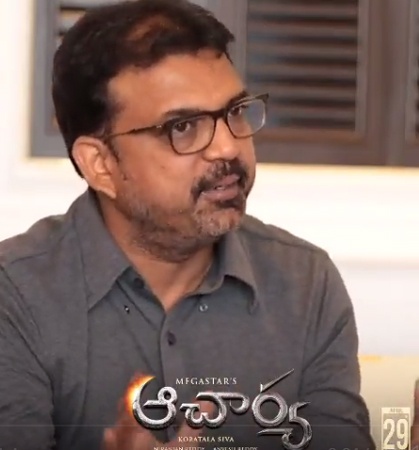 Chiranjeevi’s Acharya is up for a grand theatrical release across the globe on April 29, 2022. Ram Charan played a significant role in this action drama, directed by Siva Koratala.

In a recent interview, Siva Koratala was asked to tell about his favouite commercial film ever made in Telugu. The filmmaker has instantly replied. ‘Sagara Sangamam.’

Speaking about it he said that he liked the film for many reasons and it’s a wonderful script. Besides, he also mentioned Shankar’s blockbuster movie, Bharateeyudu, is also his favourite commercial film.

Acharya is bankrolled by Matinee Entertainment and Konidela Production Company. Pooja Hegde, Sonu Sood, Tanikella Bharani and others played prominent roles in this movie, which has Manisharma’s music.