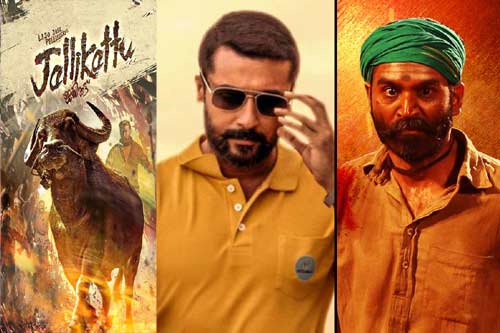 The 78th Golden Globe Awards, one of the most prestigious awards in the world, will see Suriya’s Soorarai Pottru, Dhanush’s Asuran, Jallikattu, and a select few other films from India compete with some of the best films in the world this year. The awards committee had invited entries from filmmakers all over the world as part of its Foreign Film Project.

Considering the many changes which occurred due to the pandemic, the committee tweaked the rules and expanded the eligibility criteria. So, films released between October 1, 2019 and February 28, 2021 are being considered for these awards this time. The committee has selected a whopping 137 films from 77 countries to compete for the top prize, and now, the jury members will see all these films before they select the nominations. Asuran, Soorarai Pottru, Jallikattu are expected to be screened in early January, 2021 to the members of the awards committee.

Incidentally, Jallikattu is India’s entry to the Oscars this year, but it’s also a moment of pride for Dhanush and Suriya’s fans that their favourite stars films have caught the attention of Hollywood. Apart from these three films, a select few films like Eeb Aallay Oo, Tanhaji, Trees Under The Sun, Harami, Just Like That are also in contention to land a spot in the nominations.