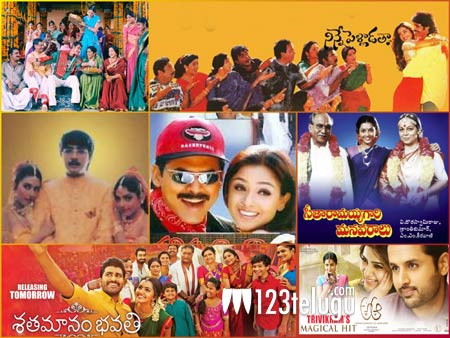 There are family entertainers and then there are family movies. We Telugu audience are a huge fans of both and a little bit more inclined towards family movies. The difference is that the former are the entertainers that have something of a liking for everyone in the family while the latter are movies based on family values, celebration of family and with huge cast compromising of relatives in the movie.

One of the earliest movies I can think of in this genre is Seetharamaiah gaari manavaralu. It was a complete celebration of a family in a village backdrop. It had very good conflicts and a pleasant look to it. It was a huge hit.

Ninne Pelladutha worked mainly because of the treatment. It was a very natural and casual movie on day to day interactions in the family. The music helped a lot too with so many classic songs that are still popular today. Pelli Sandadi was also musically super hit but its drama was cinematic although loved equally by the audience.

The next movie I can think of is Kalisundam Raa. Venkatesh who was our family hero then, made another complete family movie. It had good village back drop, grandparents, cousins, kids , bava-maradallu etc. It was a complete package. And sure audience loved it to.

Again Krishna Vamsi tried the same genre with Murari. It was another classic with beautiful look and feel. It took a while for audience to start liking it and now it enjoys a classic status. Same Mahesh tried Athadu which starts off as an action entertainer but soon changes gear into family drama. That is the reason Athadu turned out to be a huge TV hit even today.

We also had movies like Sankranthi, Alludugaru Vacharu, Maa Annayya etc which were enjoyed by smaller sections of audience. And we had movies like Nuvvosthanante Nenoddantana, Bommarillu etc that were close to the genre but more of love stories. Then came Seethamma Vakaitlo Sirimalle Chettu. A huge blockbuster only because people were desperate for a family movie and its timing could not have been perfect.

The only time a family movie failed miserable was with Brahmotsavam. But that helped another family movie greatly that came few weeks after. Which was A Aa by the most loved director by the families, Trivikram. The latest movie to be added to that list is Shathamanam Bhavathi. A movie that competed with two big ticket movies and emerged as a winner only because of the genre and how beautifully it was done.

So with all the love towards family cinemas we have, it comes as no surprise that the latest movie Raarandoi Veduka choodham with Annapurna studios starring Naga Chaitanya and Rakul Preet has managed to gather huge expectations. The trailers were beautiful both visually and musically. Here’s wishing all the best to this movie and many more family movies to come in the future that depict our culture and our families so beautifully.