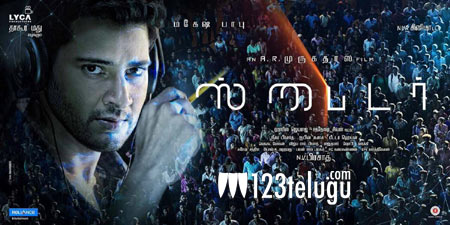 Superstar Mahesh’s highly anticipated spy-thriller, Spyder is gearing up for a grand release in Tamil as well on September 27th.

The latest update is that the film has completed its Tamil censor formalities a while ago and got an U/A certificate. The reputed production house, Lyca productions are releasing Spyder all over TN on a grand scale.

Maverick director AR Murugadoss has directed this bilingual project which has star heroine Rakul Preet as the female lead. Director-turned-actor SJ Suriya will be seen as the main antagonist in this film which has music composed by Harris Jayraj.