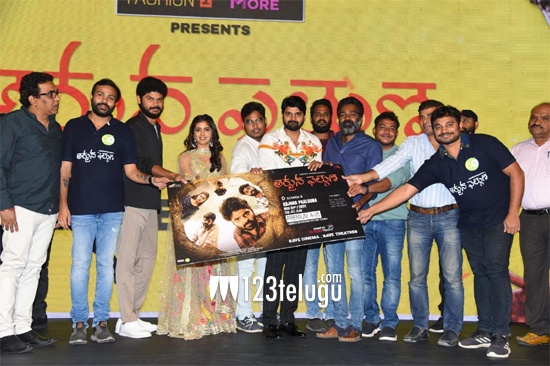 Arjuna Phalguna, the latest movie from the actor Sree Vishnu is releasing tomorrow. On this occasion, the makers have organized a pre-release event.

During the event, the lead actor Sree Vishnu said that the director, Teja Marni is a firebrand and has a force within him. Speaking about the producers, the actor said that they never questioned the unit in the entire 55 days of shooting.

Every artist gave their best to make the flick great and audiences will witness their performances on screen, said the actor.

Talking about the Godavari districts, Sree Vishnu said that the entire shooting of the movie was done there and people living there will feel proud of Godavari after watching the movie. Mulakal Lanka villagers helped the team during the shoot, added the actor.

The actor, who is confident about the movie’s success, mentioned that the Sankranthi festival will start on December 31 and end on January 15. Jr NTR fans will also be proud of this movie, noted Sree Vishnu.

“My directors are my biggest assets,” said Sree Vishnu. He also promised that he will entertain in a mass role and asked the audiences to say whether he is apt for mass roles or not, after watching the movie.

Arjuna Phalguna is all about five innocent friends and their survival, concluded Sree Vishnu.