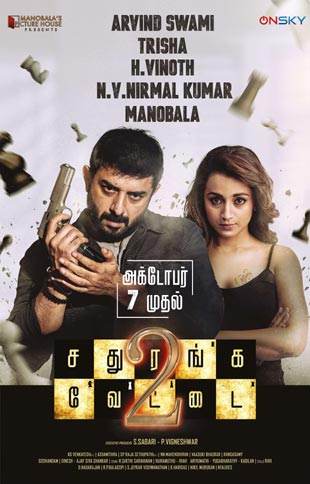 South Indian star heroine Trisha Krishnan will be seen next in Mani Ratnam’s Ponniyin Selvan: Part 1. The star-studded movie is scheduled to hit screens on September 30, 2022. Now, the actress’ other movie is confirmed to hit screens.

Titled Sathuranka Vettai 2, the long-delayed movie is locked to release in theaters on October 7, 2022. The makers took to social media and announced the same.

Produced by Manobala Picture House and Cinema City, the movie’s story is written by Valimai’s director H Vinoth. Prakash Raj, Manobala, Kumaravel, Nassar, Radha Ravi and others are also a part of this thriller movie, which has Asvamitra’s music.