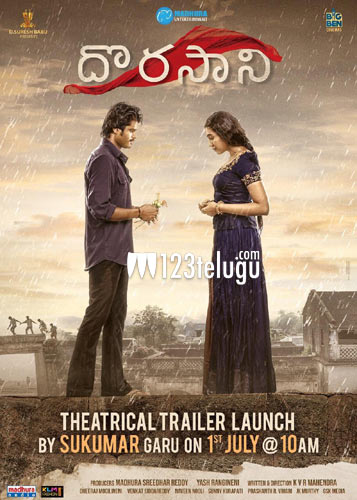 When the teaser for Vijay Deverakonda’s brother Anand Deverakonda and Rajasekhar-Jeevitha’s younger daughter Shivathmika’s debut film, Dorasani, was released last month, it was much-talked-about for various reasons. While a section of audience appreciate the classic filmmaking style and the period backdrop, several trolls targeted hero Anand for his looks and performance.

And now, Dorasani makers are all set to unveil the film’s theatrical trailer. Star director Sukumar will be unveiling the trailer on Monday (July 1) at 10 am.
Dorasani is a love story between a lower class protagonist, Raju, and the village Dorasani, Devaki. The film is said to be based on real incidents that happened in the bygone era in Telangana.

Debutant KVR Mahendra is the director and Yash Rangineni and Madhura Sreedhar are the producers of Dorasani. The film is slated for release on July 12.