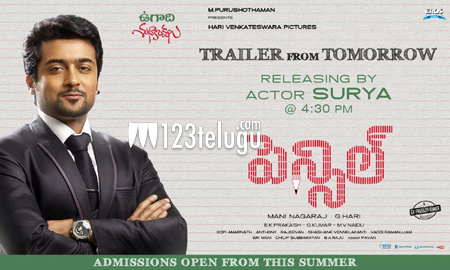 Young music composer turned successful hero GV Prakash Kumar’s next film, Pencil, is gearing up for a grand release soon. Touted to be a romantic thriller, this film has Telugu girl Sri Divya playing the female lead. This Tamil film will also be getting a simultaneous Telugu release.

Tomorrow, Pencil’s theatrical trailer will be unveiled by star Tamil hero Suriya at 4:30 pm. Suriya will be releasing the trailers of both Telugu and Tamil versions. Mani Nagraj is the film’s director and GV Prakash Kumar himself has scored the music.

Last week, there were reports that Mahesh Babu will release the audio album of Pencil, but these reports have not been confirmed officially.