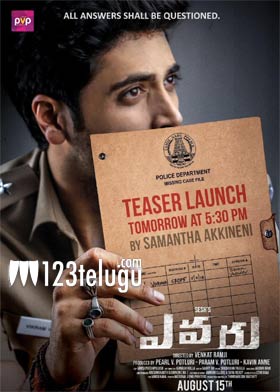 Evaru is one film which many are talking about as it has Adivi Sesh as the main lead. All his films generate superb interest and there is a good craze for this film as well.

The first look impressed many and now the latest we hear is that the teaser of the film will be launched by Samantha tomorrow evening at 5 30 pm.

Sesh will be seen as a cop in this film which also has Regina as the female lead. PVP Cinema produces this film.