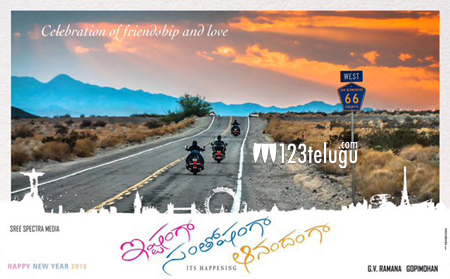 123telugu had already reported that star writer Gopimohan, who is awaiting the release of his latest project Dictator, will be making his directorial debut starring all young actors. Today, the writer-director took to Twitter to reveal the title and the logo of his debut film. The film has been interestingly titled ‘Ishtam gaa Santosham gaa Aanandham gaa’.

The film will feature an extensive US backdrop and it is touted to be a “celebration of friendship and love “.
To be produced by GV Ramana under his Sree Spectra Media banner, the film’s regular shooting will commence soon and more details will be revealed in February.