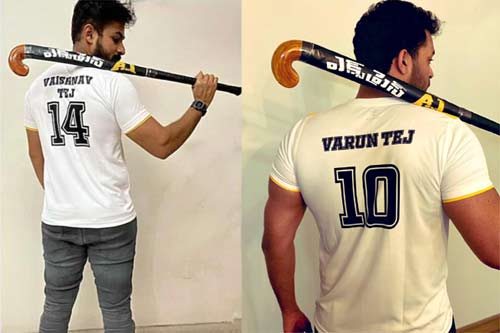 Hero Sundeep Kishan’s A1 Express will mark his 25th film as an actor. The film is all set for release in a few hours. Sundeep and the film’s entire unit had worked quite hard on this passion project and the film has managed to generate a decent pre-release buzz.

Meanwhile, Sundeep Kishan has sent A1 Express themed personalized jersey, hockey stick and other goodies to young Mega heroes Varun Tej and Vaishnav Tej. Both Varun and Vaishnav took to Twitter and tweeted a picture of them wearing the A1 Express t-shirt and holding the hockey stick in their hands.

A1 Express has talented young actress Lavanya Tripathi as the female lead. The film has been directed by debutant Dennis Jeevan Kanukolanu.

Thanks for the personalised jersey and goodies @sundeepkishan
I know how passionate you are about this project…
Wishing you , @Itslavanya and the entire team of #A1express all the best for the release Tom.#A1ExpressOnMarch5th 🏑 pic.twitter.com/15lZCjjBmk