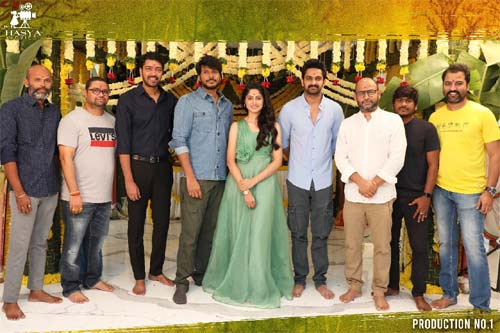 Hero Sundeep Kishan has joined hands with his Tiger director VI Anand for his next project. This as-yet-untitled film has had its formal launch this morning in Hyderabad. Top producer Anil Sunkara is presenting the film. The regular shoot will commence from October.

Senior producer Gemini Kiran and producer Sudheer handed over the script to the makers, while hero Allari Naresh sounded the first clap for the muhurtham shot and Naga Shaurya switched on the camera. Naandhi director Vijay Kanakamedala directed the muhurtham shot.

Mumbai girl Kavya Thapar, who made a decent impression with her performance in Ek Mini Katha, and young Sandalwood actress Khushee Ravi, who stole everyone’s hearts with her endearing performance in the blockbuster Kannada romantic drama, Dia, are the leading ladies in the movie. Rajesh Danda is bankrolling the project on Hasya Movies banner. Shekhar Chandra is the music composer.