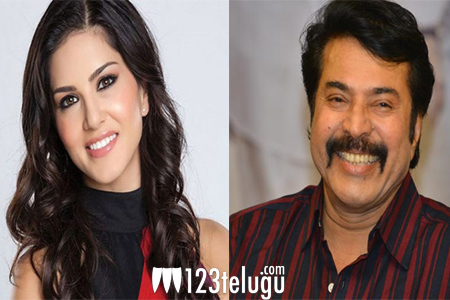 Sunny Leone is all set to make her debut in Malayalam cinema later this year with a special song in Mammootty’s upcoming film Madhura Raja. The film, which has Sunny shaking a leg with the Malayalam superstar, is the sequel to Pokkiri Raja. Interestingly, her first meeting with Mammootty was anything but smooth.

The film’s director, Vysakh stated that Sunny Leone was quite nervous about sharing screen space with Mammootty. “Before coming to the location, she had already read about Mammukka and also had heard that the actor is a serious man and will not interact freely with his colleagues. So, when she saw Mammukka in the Madhura Raja attire, she literally got scared and was a bit worried initially. However, she quickly befriended everybody on the sets,” Vysakh revealed.

The actress has signed another Malayalam film, titled Rangeela, which will be directed by Santosh Nair. Sunny has already been shooting for the film and it’s expected to release later this year.